The uterus, which is part of the female reproductive system, is where the foetus develops. The uterine wall is lined with a membrane called endometrium or endometrial tissue. In response to female hormones, the endometrium thickens every month in preparation for possible pregnancy. If pregnancy does not occur, the built up lining is shed during the menstrual period. 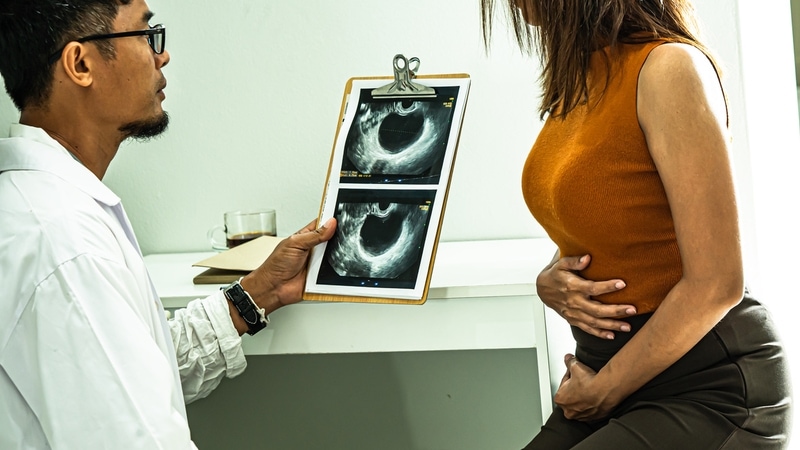 The uterus, which is part of the female reproductive system, is where the foetus develops. The uterine wall is lined with a membrane called endometrium or endometrial tissue. In response to female hormones, the endometrium thickens every month in preparation for possible pregnancy. If pregnancy does not occur, the built up lining is shed during the menstrual period.

In some women, the endometrial tissue grows outside the uterus. This is known as endometriosis. Fragments of endometrial tissue that have been shed, attach to the walls of the abdomen or other organs. While no longer in the uterus, the tissues continue to react to the female hormones responsible for menstruation. Normally, the unused portion of the endometrium exits through the vagina. However, when endometrial tissue builds up in unusual areas, it has no where to exit the body. This can lead to irritation, cysts, adherences and scar tissue.

Endometriosis is a disorder that affects roughly 10% of women who have periods. The most common locations for growths are the ovaries, the fallopian tubes, the ligaments supporting the uterus and the outer surface of the uterus. The intestines, bladder, rectum and peritoneum (membrane lining the abdomen) may also be affected, though less frequently.

The causes of endometriosis are unknown. Several hypotheses have been put forward but remain unproven. What we do know however, is that women with family members who have endometriosis are more likely to develop the disease.

There are no symptoms specific to endometriosis. In fact, some women have no symptoms at all. Close to 40% of those who have endometriosis experience infertility problems. It becomes increasingly difficult to conceive as the disease progresses. Other common symptoms include:

The first step towards diagnosing endometriosis is usually a gynecological examination. Since this alone is not enough to make a final diagnosis, closer examination of the internal organs is necessary. This generally requires a laparoscopy. This procedure involves making a small incision close to the navel through which a thin, flexible tube is inserted, allowing the physician to view the organs. A laparoscopy is also used to see whether endometrial tissue is present in areas other than the uterus. Complementary medical imaging tests may also be requested.

Treatment often involves a combination of medication and surgery. Analgesics (ex: Tylenol®) and anti- inflammatories (ex: Advil®, Naprosyn®) are used to alleviate pain. Various medications can also be taken to re-establish hormonal balance. Surgery is performed to reduce the number of adherences and to reduce pain. The type of surgery depends on the extent of the disease and the whether the patient wishes to have children.

Some claim that lifestyle changes contribute to alleviating symptoms associated with endometriosis. That being said, dietary changes and exercise may be beneficial. Pregnancy also provides temporarily relief from symptoms. For its part, menopause offers a more definite resolution.

FREE DELIVERY ALL OVER CANADA

PHARMACISTS AVAILABLE FOR YOU

The pharmacy services presented in this section are offered by Airix partner pharmacist owners. The pharmacists are solely responsible for the professional activities carried out during the practice of pharmacy. These services are offered in participating pharmacies only. Certain fees and conditions may apply.