Conception occurs if a male's sperm successfully penetrates a female's egg following sexual intercourse. Pregnancy ensues if the fertilized egg manages to implant itself into the uterus. The goal of birth control (also known as contraception) is to prevent pregnancy by stopping sperm from reaching the egg, or by preventing the implantation of a fertilized egg. 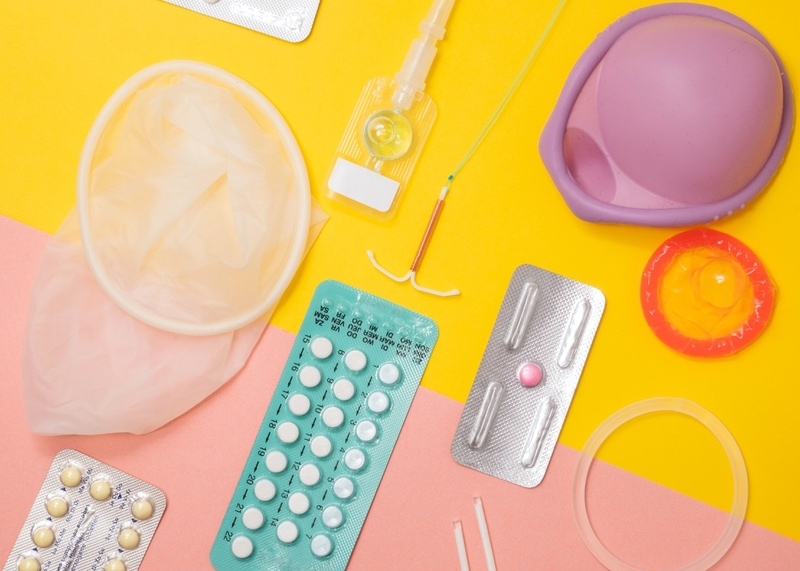 Conception occurs if a male's sperm successfully penetrates a female's egg following sexual intercourse. Pregnancy ensues if the fertilized egg manages to implant itself into the uterus. The goal of birth control (also known as contraception) is to prevent pregnancy by stopping sperm from reaching the egg, or by preventing the implantation of a fertilized egg.

Barrier methods include condoms, diaphragms, contraceptive sponges and cervical caps. They physically block sperm from reaching and fertilizing the egg.

Contraceptive sponges, cervical caps, and diaphragms should be used with spermicide. To be effective, they must be placed over the cervix prior to penetration, and should be left in place for several hours after intercourse. These methods do not protect against STBBIs.

This category includes oral contraceptive pills, (also known as the pill or birth control pills), vaginal rings, contraceptive patches, injectable contraception, and hormone intrauterine devices (IUDs). Each method involves the administration (gradual or not) of hormones that prevent ovulation or the implantation of a fertilized egg in the uterus. They do not protect against STBBIs.

Birth control pills (the most popular form of hormonal contraception), along with vaginal rings and contraceptive patches, deliver two hormones, namely estrogen and progestin. These methods of birth control are highly effective and offer many advantages, including:

For women with an intolerance or contraindication to estrogen, there are progestin-only hormonal contraceptives such as the mini-pill, injectable contraception, and hormonal intrauterine devices.

Unlike birth control pills, many forms of hormonal contraception require less patient involvement. These include transdermal patches, which are applied on the skin once a week, vaginal rings, replaced monthly, hormonal IUDs, which are inserted into the uterus for several years, and injectable progesterone contraceptives, administered every 3 months.

The copper IUD makes it more difficult for sperm to enter the uterus and creates an unsuitable environment for implantation. IUDs must be inserted by a doctor. This contraceptive method does not protect against STBBIs.

This method of contraception is effective if all of the following criteria are met: Menstrual periods have not yet returned

Child is exclusively or almost exclusively breastfed (no other foods or liquids are given to the baby, no pacifier use, child breastfed on demand)

Baby is less than 6 months old

Protection is reduced if any one of these criteria are not met, in which case an additional method of contraception should be used if the woman does not want to conceive. This method does not protect against STBBIs.

Tracking ovulation signs (e.g., changes in the appearance of vaginal discharge), urine tests and daily measuring of basal body temperature can help women or couples familiarize themselves with the woman's menstrual cycle, and determine when ovulation occurs. Couples can then decide whether or not they want to try to conceive.

Since hormones or products that may be sensitizing (e.g., latex, spermicide) are not used, this method is free of side effects and does not interfere with breastfeeding. It does, however, require a great deal of discipline and a considerable amount of practice to learn how to use this method properly. It is therefore not very effective in preventing pregnancy. Furthermore, it does not protect against STBBIs.

These methods include withdrawal (also known as the pull-out method or coitus interruptus) and abstinence. Withdrawal involves withdrawing the penis from the vagina and away from the external genitalia of the female partner prior to ejaculation. It is a risky method since pregnancy can still happen even if the male pulls out in time. Abstinence involves avoiding any contact between the penis and the vagina, and any contact between pre- ejaculate or sperm and the vagina. In practice, this method is not particularly effective since it requires a great deal of discipline from both partners.

The ECP is most effective when taken as soon as possible after having unprotected sex, but can be used up to 5 days after having sex. It is available following a consultation with a health care professional. If it fails to prevent pregnancy, it will not harm the fetus.

The copper IUD is a non-hormonal contraceptive that must be inserted into the uterus by a doctor within 7 days of having unprotected intercourse. It can be left in place and used to provide ongoing and long-term birth control.

Emergency contraception is more effective if used occasionally rather than as a regular birth control method. It does not offer any protection against STBBIs.

FREE DELIVERY ALL OVER CANADA

PHARMACISTS AVAILABLE FOR YOU

The pharmacy services presented in this section are offered by Airix partner pharmacist owners. The pharmacists are solely responsible for the professional activities carried out during the practice of pharmacy. These services are offered in participating pharmacies only. Certain fees and conditions may apply.